At its core, our city is dynamic. Our roots run deep, our heritage is rich and our confluence of cultures is celebrated. Our population and cultural influences are diverse – Mexican, Tejano, German, Irish, Czechoslovakian, and more – and our appreciation of that diversity makes our city shine.

Come discover classic gems and explore what’s new in our diverse communities, offerings and celebrations, and get inspired at VisitSanAntonio.com.

5 Ways to Get Inspired in San Antonio The Witte Museum, where nature, science and culture meet, hit an exhilarating milestone in March of 2017, when the new Witte opened to visitors after two years of construction and more than 170,000 square feet of renovation and expansion. Massive new exhibitions on dinosaurs, People of the Pecos and Texas Wild highlight changes at the new Witte, located on the banks of the San Antonio River. The renaissance of the 90-year-old Witte Museum is emblematic of the growth of San Antonio, especially as a catalyst to development of the Broadway Cultural Corridor. The Witte houses a key feature of San Antonio’s 300-year-old history, the 1719 Acequia Madre and Diversion Dam. The San Antonio Museum of Art is located in the distinctive, historic Lone Star Brewery building on the River Walk’s Museum Reach. The museum features 5,000 years of art from cultures around the world, including inimitable collections of Chinese and Latin American art; crowd pleasing mummies, swords and a sand mandala; and family-friendly activities and tours. The renowned Latin American art collection spans from pre-Columbian to the modern era in the Nelson A. Rockefeller Center for Latin American Art. Visitors will see works of art from all over Asia, Europe, the Middle East, Oceania, Ancient Rome, Greece and Egypt, as well as galleries featuring American and Texan artists and a glass ceiling by Dale Chihuly. The Southwest School of Art was established in 1965 and occupies several downtown acres along the River Walk. A portion is a historic landmark established in 1851 as the Ursuline Convent and Academy, the first school for girls in San Antonio. The Southwest School of Art is the only independent college of art in Texas, offering a Bachelor of Fine Arts degree, as well as studio art classes for the community. The school also annually serves over 10,000 youth, most from low-income areas of the city, while also enrolling more than 2,000 adults. Regularly changing exhibitions of contemporary art are free to the public and focus on works by regional, national and international artists. Now in its 30th year, Blue Star Contemporary (BSC) serves as an incubator for contemporary art in San Antonio, hosting over 20 exhibitions each year within its four onsite galleries and multiple offsite locations throughout the city that feature emerging and established artists from the Alamo City and across the globe. BSC expands the international contemporary art dialogue through an international exchange partnership with the Künstlerhaus Bethanien (KB) in Berlin, Germany, by sending Bexar county artists for 3 month residencies and in turn bringing KB residents to San Antonio. Each year, over 300,000 visitors interact with contemporary art at BSC through exhibitions, the MOSAIC Student Artist Program, and community outreach allowing BSC to fulfill its mission to inspire, nurture and innovate through contemporary art.

Nature’s Creations Inspired Our Own

Peeling back the layers of history

Where four Texas ecological zones intersect, so too do our roots  in innovation, discovery and adventure. While found artifacts date back over 10,000 years, the recorded history of our city began in 1693, when it was named San Antonio de Padua by a Spanish Franciscan priest. In 1718, the founding of Mission San Antonio de Valero (which was relocated and later called the Alamo) and a military presidio on the riverbank marked the official birth of this city that would endure and grow for hundreds of years.

Progress continued to swell the riverbanks through 1920 when the San Antonio Conservation Society created a space for parks, shops, restaurants, offices and hotels that became the River Walk as we know it today. San Antonio celebrated its 250th anniversary by hosting the 1968 World’s Fair, which the city accommodated with a lengthened River Walk, opening it to river barges and setting the stage for national attention that’s made the Paseo del Rio one of the state’s top visitor destinations.

The construction of San Antonio’s five missions laid a cultural foundation along the river in the 1700s. Along with Mission San Antonio de Valero, Missions San José, Concepción, San Juan and Espada served the native people by teaching them skills, trades, religion and the Spanish language. Today, the missions remain active church parishes for their surrounding communities and serve as an inspiration to the world as a recently designated UNESCO World Heritage Site, only the 23rd such site in the U.S. Ingenuity finds a home indoors & out

As ceramists, singers, dancers, poets, historians, naturalists, cowboys, folklorists and more arrived and thrived, drawing from the city’s vibrant living history, spaces to serve these creative influencers were carved into the heart of the city. In 2009, the Museum Reach section was built to extend the River Walk and provide a place where San Antonio’s now vibrant creative and natural culture could flourish.

A timeless character built with our hands

It wasn’t just what nature built that made San Antonio great. San Antonio’s architecture is layered with history and innovation, showing its growth from a frontier town to one of Texas’ most architecturally historic cities. Shaping the landscape today are multiple diverse architectural styles preserved to celebrate our history and repurposed to endure. Unique Foundations for The Future

Created to inspire, made to endure

A past rich with natural beauty and elegant history isn’t complete without modern flair. Rapid economic growth since the mid-20th century has led to iconic, contemporary architecture designed by some of the most highly respected architects in the U.S. and unlike any other in the world. La Antorcha de la Amistad (Spanish for “The Torch of Friendship”) is a 65-foot tall, enameled iron, orange-colored sculpture in downtown San Antonio that was created by distinguished Mexican artist Sebastián and presented to the city as a gift from the Mexican government. Our Culture is a Living Work of Art

The contributions of San Antonio’s many talented artists over the course of 300 years are evident throughout the city. The rich Spanish and Mexican heritage, with its tradition of embracing art and artists, has seeped into all facets of the San Antonio story, from cowboy poetry and folkloric dance to public art, blockbuster exhibitions and multimedia theater productions. 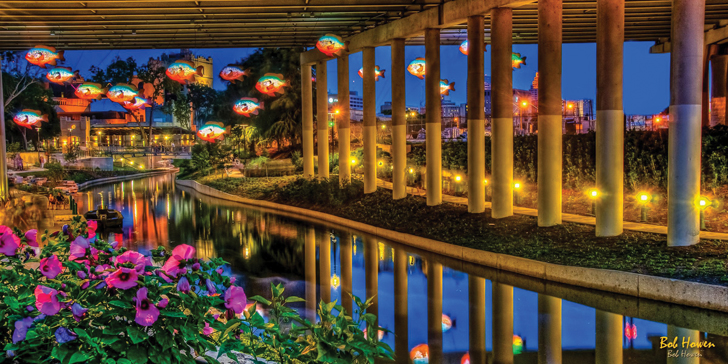 Plates as vivid as our paintings

San Antonio is a city bursting with flavor. Our food scene blends our multicultural heritage and rich culinary traditions resulting in bold, original recipes found in locally owned, chef-driven restaurants. As a result, San Antonio has been designated a UNESCO Creative City of Gastronomy, one of only two cities in the United States. Stroll our famed River Walk or explore Pearl, a reimagined historical brewery home to the Culinary Institute of America, San Antonio, and one of our city’s hottest culinary and cultural destinations. Satisfy your cravings with three new curated Food Trails highlighting the Alamo City’s best tacos, barbecue and margaritas. Think specialty tacos, the finest smoked brisket, and smooth and salty margaritas. 15 Things to Do in the Golden Isles